This beautiful structure, this great wall of galaxies is a supercluster complex that was identified using the Baryon Oscillation Spectroscopic Survey (BOSS) of the Sloan Digital Sky Survey (SDSS) in early 2016.

The BOSS Great Wall is one of the largestsuperstructures in the observable Universe.

The wall is made up of 830 separate galaxies that gravity has corralled into four superclusters, connected by massive filaments of hot gas.
Joshua Sokol reports for New Scientist. This creates a twisting structure that resembles a cosmic honeycomb.

On the grandest scales, the universe resembles a cosmic web of matter surrounding empty voids and this walls are the thickest threads, he writes.

Lurking 4.5 to 6.5 billion lightyears away, the BOSS has an estimated mass of 10.000 times greater than our galaxy Milky Way and recently described the find in the journal Astronomy & Astrophysics. 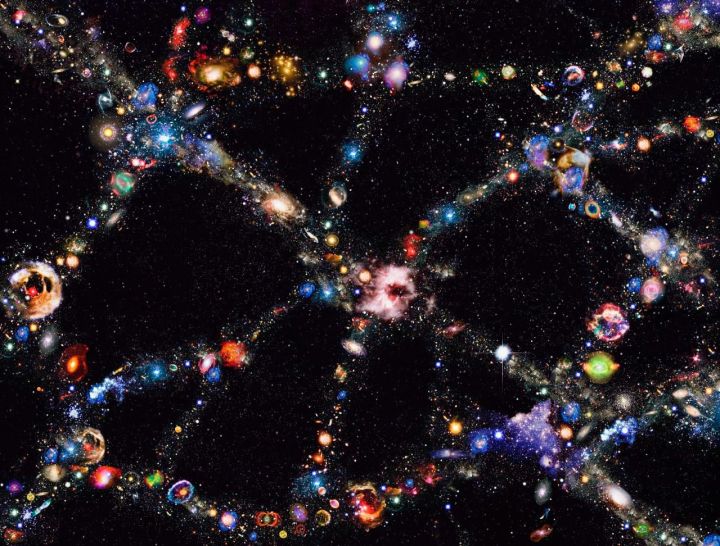 Sky news explains that the BOSS is two thirds bigger than the previous record holder, the Sloan Great Wall, which was discovered in 2003. It also dwarfs both the CfA2 Wall discovered in 1989 and the Laniakea supercluster, the neighbourhood where our own Milky Way resides.

Not everyone is convinced that the BOSS is truly the biggest, though.
“I don’t entirely understand why they are connecting all of these features together to call them a single structure, “ said Allison Coil of the University of California in San Diego tells New Scientist.
“There are clearly kinds and bends in this structure that don’t exist, for example in the Sloan Great Wall.”

According to the Washington Post, the Great Wall is a supercluster that spans a grand total of 1 billion light years across and weighing 10.000 times the amount of all the matter in the Milky Way.

Researchers for the Sloan Digital Sky Survey have been trying to map the web in order to better understand the universe’s history, size and speed of expansion.Using a dedicated telescope located in the remote desert scrubland of Sunspot, N.M., they scan huge swaths of the sky for distant galaxies, brilliant quasars and other celestial objects.

In the process, they’ve found some pretty enourmous things. Like the “Sloan Great Wall”, which Lietzen and her co-authors say is the closest system of superclusters comparable to the BGW.

But even that is dwarfed by the Sloan survey’s newest find.The BOSS Great Wall has ten times the volume of the Sloan Wall and is almost 70% larger in diameter.